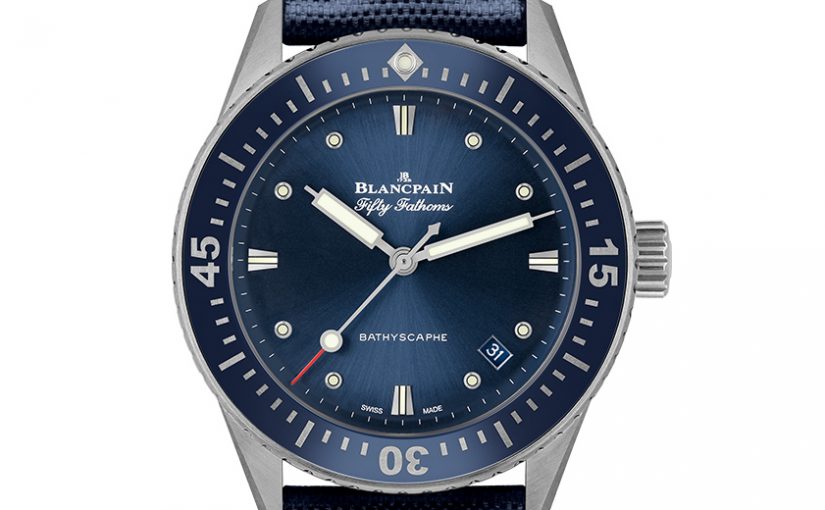 That isn’t the change that made us sit up and take notice, however. The major difference is the size: the new Fifty Fathoms Bathyscaphe from Blancpain men’s replica comes in at a petite 38mm (and yes, it is for men). Prayers answered for many a Blancpain fan, we’d wager.

The modern day Blancpain Fifty Fathoms Bathyscaphe replica takes its cues from a late-1950s Fifty Fathoms. Like most recent vintage-inspired relaunches, the new version was larger than the old: the first model, from 2013, was 43mm.

Which is what makes this rather surprising. The new 38mm model is even smaller than the very first Fifty Fathoms created by Blancpain’s CEO Jean-Jacques Fiechter: it measured in at 41mm, a beast for the time.

Visible through the sapphire glass caseback of the new Bathyscaphe is the calibre 1150, complete with two series-coupled barrels to give a 100-hour power reserve.

Blancpain isn’t the only brand to do a bit of trimming: at Bremont’s Bloomsbury townhouse, the English brothers revealed the Airco Mach 1 and Mach 2, which saw the Trip-Tick case in a 40mm size for the first time, following a customer survey that showed serious demand for a smaller replica watch.

Panera’s newest dive replica watch, the Luminor Submersible 1950 3 Days Automatic Acciaio, is 42mm across; large for some wrists, but consider that it’s a full 5mm smaller than its predecessor, and is Panerai’s most hardcore model. It seems the brands have tapped into an interest for tool replica watches that don’t feel like heavy machinery.