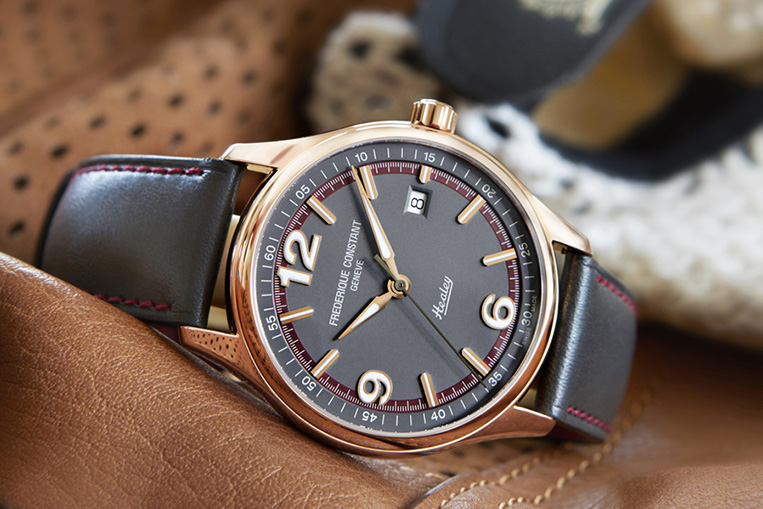 Frederique Constant Mens Replica has partnered with Healey for 12 years, and as a tribute to this period in the brand’s history, has released a limited edition series of watches. Earlier this month, the line was unveiled to a small collection of Austin-Healey devotees from the French Healey car club that had been invited to the watch brand’s Manufacture in Plan-les-Ouates.

In the period following the Second World War, after the need for austerity and practicality was beginning to subside, the British motoring industry underwent something of a revolution. All of a sudden, sporty, glamorous—and surprisingly affordable—roadsters flooded the streets of the UK, produced by likes of MG, Jaguar and Austin-Healey. Established in 1952 in a merger between the Austin Motor Company and the Donald Healey Motor Company, the Austin-Healey brand was one of the leaders of this golden age in British sports motoring. The production of these stylish British motors ended in 1972, but they have become icons in the world of sportscars.

The Vintage Rally is available in either a stainless steel or rose gold-plated 40mm, three-part case. Sleek and elegant, the watch is styled like a classic racing watch, with large Arabic numerals and hands coated in SuperLumiNova to make the dial highly legible. The dials come in grey with a contrasting burgundy ring, or silver with a dark grey ring, and a discreet window at 3 o’clock shows the date, while the Healey logo is visible just above 6 o’clock. The watch is powered by the in-house calibre FC-303, which beats at 28,800vph and offers a 38 hour power reserve.

The Frederique Constant Vintage Rally replica watches are numbered to 2,888 for each type, and as a nice extra touch, come in a special gift box that also includes a miniature model of the Austin-Healey NOJ393, the test car that raced at Le Mans in 1953.